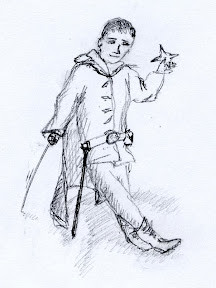 Peregrin is a refined clansman, an accomplished adventurer, a successful entrepreneur, and a reputed philanthropist. He and his band of intrepid heroes have battled goblin hordes, fought demons, captured pirates, rooted out corruption and saved entire communities. Peregrin first became heard of in Sandpoint, a small town near Manigmar. He has risen from a minor diplomat of the Knotwise Clan to a local hero and a topic of conversation in nearby communities.

Rumours tell that Peregrin actually died once in a terrible stroke of ill fortune. Whether it was the return from Celestia or the circumstances of his death, when his friends brought him back from the dead he was never the same. He became gloomy, dispirited and introverted, and often spent long periods alone in thought. It is said that he prayed to Desna to break his curse of bad luck. Some time after a young Halfling cleric of Desna arrived in Sandpoint, who now accompanies Peregrin on his journeys.

Physically, Pergrin is of lithe and nimble build and, when necessary, has the reflexes of a cat. His eyes are bright and alert, although the creases in the corners of his eyes betray his experience and his well trimmed beard adds some years to Peregrin’s apparent age. A finely crafted shortsword hangs loosely in its sheath, a shortbow is strapped within easy reach to his back, and a quiver of arrows is always at the ready. Peregrin wears several distinctive items which have the look of business about them. Although well disguised amongst the folds of his silk tunic and cloak, numerous leather pouches and pockets provide ample storage for whatever manner of magical, mechanical, and alchemical tricks Peregrin might have up his sleeves. The suit of living rosewood armour is also quite unusal, and it is unclear whether the various gloves, rings, amulets and bracers are merely decorative or whether they serve a more functional purpose. Aside from the fact that Peregrin looks like medieval GI-Joe, he is quite well styled and wears long sleeved silk shirts and black satin pants with his gear, disguising it where possible. Despite his prepared-for-anything appearence, Peregrin is pleasant, likable, and is not at all threatening.