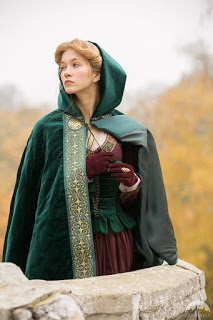 Anne has been widowed twice. She moved to [[Blackleg?]] when her husband, [[Arn_of_Waldheim?]], took the city during an extremely intense [[Yim_Yimsley?|"Yimslite"]] rebellion. Her husband was murdered under mysterious circumstances - many speak of the involvement of both the sinister [[Brotherhood_(of_Thieves_and_Assassins?|Brotherhood]] and Bishop Notker himself. She became Notker’s ward for a sort time before being married off to the most recent Lord of Blackleg, [[Baltzer_the_Bold?]]. Baltzer recently perished either due to the actions of his wife or the vengeful shade of Arn, no one knows for sure. In either case, she is once again the ward of Notker but also the only authority in Blackleg. [[Abraham_Nermal?]], deformed rogue and vassal of the Bishop, hopes to win her hand in marriage.