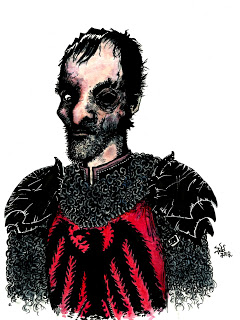 Arnawald is a man of brutal reputation. His desire to make himself the sole lord of the entire [[Dark_Country?]] is obvious and has placed him in a kind of cold war with Bishop Notker. He has invaded the Bishop’s territory twice, but ostensibly to “aid” Notker against either [[The_White_Lady?|the White Lady's]] [[pig-men?]] or [[Yim_Yimsley?|Yimslite]] rebels (see below). During the second incident, he was able to capture the town of [[Blackleg?]], which he gave to his son [[Arn_of_Waldheim?|Arn]], and the villages south of [[Nightwick_Abbey?]]. He planned further campaigns but was stopped when the release of [[Father_Winter?]] caused a blizzard in July, killing many of his men. It is said he still holds a grudge against Father Winter. Neither he nor Notker seem willing to declare open war yet for mysterious reasons. He is known for his missing eye, which he leaves uncovered to unnerve those he is negotiating with.