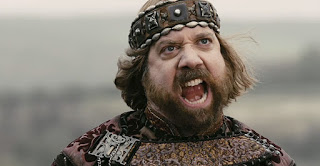 Notker the Unshaven is Prince-Bishop of [[Lychgate?]] and as such technically rules [[Nightwick?]], [[Blackleg?]], and the villages in the Southern Dark Country. He is a petty, greedy man whose naked avarice is a constant source of woe for his subjects. In the years since 1388, his territory has been greatly diminished by attacks from [[The_White_Lady?]], Arnawald, and [[Yim_Yimsley?|Yimslite]] rebels. He now can only effectively control Lychgate and Nightwick, but even the road between them is unsafe due to the destruction of [[Vollage?]] and the absorption of the [[Witchfort?]] into the [[Witchwood?]].

Recently he had managed to claw some territory back, but his forces were defeated by the White Lady at the [[Battle_of_Vollage?]] and many of his chief lieutenants were captured.

He also had some role in a plot to bring [[Stavros_Chrysophylax_Balsamon?|Stavros]] and [[Kozel?]] up on heresy charges, though this plan seems to have been abandoned.