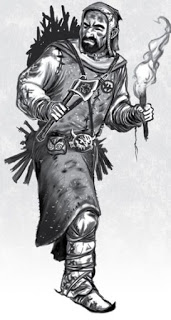 Randulf is a woodsmen and friend of the [[Woodsmen's_Lodge?]], though seemingly not a member of it. He acts as a guide for them during their longer trips into The Fog-bound Forest. The respect they have for him is rivaled only by their respect for [[Kozel?]] in his role as priest of “[[Father_Winter?|Saint Santa Claus]].” He has seemingly avoided the party every time they have tried to contact him.