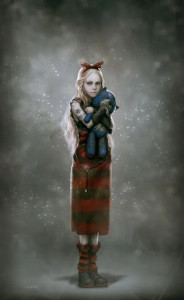 The BULLS found themselves sprawled on the floor of the vibrating train – iron rattling their hazy brains. With the strange dream of the Lavender Lady fresh in their minds, they set off to solve the problem of their forward locomotion. On the way, Vond examined some of the comatose train passengers to find strange ethereal threads drawing forth from their spirits. These spirit threads gathered in intensity and volume as the BULLS made their gradual progress car to car, passing by more sleeping passengers.

The first sign of life came from an otherwise abandoned baggage car, where the BULLS found a singing girl. She danced among the many threads stretched through the car, reveling in the sounds that only she could hear plucked from their vibrating frequencies. Emily Clard, as she was called, did not seem troubled. In fact, she seemed to have gone through this strange course of events before. Once Waylan gained her trust with his remarkably light dance-steps, she told them of her love for the strange music of The Conductor. A person who she had seen many times, but never met. Recognizing the girl as the daughter of the recently murdered Dunvil Clard, the BULLS spared her the news of her father, and instead pushed onward towards the train’s engine.

In the next car they met the strange man of Emily’s fascinations: The Conductor himself. Seemingly a major spirit, he appeared human to the mortal eye, but could be seen as in his true ghoslty form with Vond’s goggles. He ignored the presence of the BULLS as he stood above a sleeping passenger; gently waving, swirling, and conducting the strange threads coming from the man onto a small baton. So absorbed was he in his creation, that it took another beautiful dancing performance from Waylan, in the style of The Conductor’s music, to finally get his attention. But the BULLS would find no easy answers, as The Conductor and his stories came in the from of operatic song and musical allusion. Through careful study, they were able to put together a the grim story of The Conductor’s birth: he was a the unfortunate result of a cataclysmic soul-rending event on this very train some time ago. An event that left everyone else dead, and somehow caused The Conductor to absorbed the spirits of everyone else aboard.

It was during this interpretation of The Conductor’s theatrical reply, that the BULLS realized the the distraction they had crafted led to the waking of one of the other BULL crews. As the more veteran crew came through their train car, they came with a singular purpose: to destroy this major soul that now stood in front of them. Waylan, Stev, Vond, and Ari were not about to let a rival crew push them around. They jumped into action in an attempt to prevent the destruction of The Conductor, and the ending of his strange answers. Unfortunately, the element of surprise and advanced experience ended in a bloodied Ari and Stev, a captured team, and a now very silent Conductor. 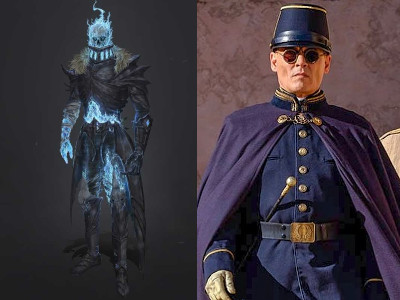 Finding themselves bested, and thrown into the makeshift prison of the storage car, the BULLS planned their escape. Their first attempts at escape by leveraging Bishop proved fruitless, as Emily reappeared and took the curious automaton as her pet. The distrustful girl’s compassion won out in the end, as she provided a medkit to the injured team before departing to play with her new pet. The ever independent Ari was the first to escape, using the medkit to escape, providing her crew access to their nearby equipment as she went off in search of a method of letting them out. By the time she hunted down the rival BULL captain and snagged his keychain, Stev had powered his iron gear and methodically bent and broke the metal cages imprisoning the rest of them.

The final challenge to their freedom was dealt with via diplomacy and leverage; the BULLS taking a different strategy then the physical scuffle that had previously brought them down. By leveraging Vond’s noble title, and their knowledge of the rival crew’s cooperation with the now missing Mardus Bowman, the opposing sides were able to agree to set their histories aside and to arrive at an uneasy truce.

Yet with things inside the train finally settled, things outside seemed to grow markedly worse. At this point no one seemed to know what was driving the train forward anymore, and as the BULLS were carried ever forward through the pass, they saw the sky filled with the shepherding souls of countless flying spirits. A cloud of ethereal blue in the starless sky.