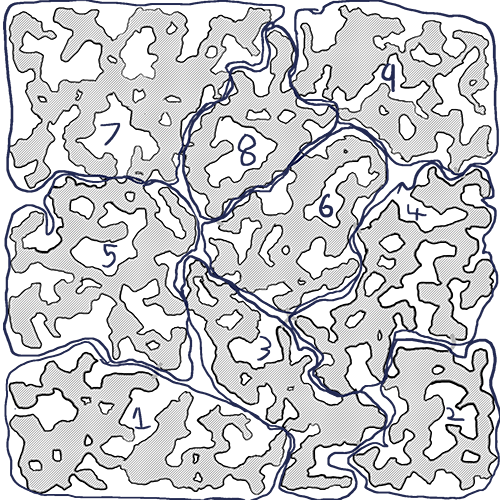 The underground is a massive, dense, and tangled network of caves and tunnels. Each region has a distinct ecosystem, climate, and topgraphy. Nobody knows how the cave system originally formed, theories range from it being the result of hundreds of thousands of years of erosion, to it being built by an ancient extinct race, to it being an act of a deity. Rydovian explorers have discovered 9 distinct regions.

Alchel province was the last region to be discovered by Rydovan, first mapped in 143 AR. It is a temperate region, with many flat, wide, and low caves. The province is known most for being the “bread basket” of Rydovan as it is responsible for producing most of the empire’s grain. The ecology of most of Alchel used to be bioluminescent forests, a symbiotic relationship between glowing fungus, grasses and shrubs, and native creatures. Much of the forests have been cut down to make room for farms in the unnaturally fertile soil. Most people in the region live in small agricultural towns, lumber camps, and the few cities.

In recent decades, there have been many reported dissappearances. This was first noticed to be a major trend in 261 AR when an active logging camp was discovered to be completely abandoned. The small towns have requested aid from the regional and imperial governments many times, but they have recieved no assistance from either. The most major dissappearance was in 291 AR, when the small town of Imruk had the entire population of 900 people dissappear overnight without a trace.

Keg-Met province is known for it’s extremely hostile environment. It is comprised of tight caverns with many sharp bends and changes in altitude, leading to it being extremely hard to navigate and map. Only a few tunnels are safe to navigate, as most tunnels have razor sharp rock formations, are dangerously hot, or are blocked by flows of magma. The creatures are almost as hostile as the environment, there are frequent attacks by fiends, elementals, and evil dragons. This doesn’t mean that the entire region is hostile or uninhabited. The region has many stronghold cities, capitalizing on the region’s famed skymetal trade. Keg-Met is the only region with forges hot enough to work adamantine, and the region has rich deposits of the skymetals.

After the death of Verjkan II, many cities declared independence, most prominently the capital, Cutho. Many of the rebelling cities have been reported to have a change of leadership, Cutho is rumored to now be led by the fiends that once threatened the city. Most people living in the cities deny the presence of outsiders living in the cities, but a small number claim that many people were forced to deny it.

Akvianos is comprised of colossal caverns and tunnels, almost all of them are partially flooded, forming a loosely connected underground sea. The region is responsible for almost all transportation between Alchel, Keg-Met, Sholn, and the rest of the empire. Most people in the region live on boats as dry caverns are very few and far between. Shipping between regions is done by only the bravest captains, as the dangers lurking beneath the surface of the water can be worse than any fleet of pirates. Ships that aren’t braving the empty stretches of sea can often be found docked together, forming a floating town. These floating towns are often temporary and the layout is always changing as new ships join and old ships leave. The largest of these floating communities is the town of Akrin, a large city comprised of thousands of vessels, and tens of thousands of residents.

For a very long time, a number of ships have reported sightings of strange creatures in the deepest caves and around the few dry caves that have ysoki ruins. The few explorers who have returned from investigating the sightings report that there are massive flooded cities beneath the sea. Whether these cities are evidence of a long-destroyed civilization or a civilization of unmet people is unknown, and emperor Setillus banned all exploration into the depths of the region after the destruction of an imperial trireme was linked to explorers in 186 AR. After the Death of Verjkan II, many explorers have returned to the region but they have had trouble with privateers.

Sholn is famed for it’s huge flora and fauna, entire caverns can be filled with a single organism; it is rumored that many of the caves of Sholn are just the insides of some of these colossal organisms. The environment makes it extremely difficult to settle large towns, the few civilized settlements are often small towns taking advantage of the large flora and sometimes the fauna. Out of all life in the jungle, the deadliest is easily the bloodhaze mosquito, responsible for making sleeping sickness the most common cause of death. Other dangers include Sabosans, Mngwa, Umasi, and hostile humanoids.

Sholn’s greatest mystery and danger are the shifting caves. Many of the tunnels have moved relative to other tunnels. This has led to much of the province remaining unexplored and many explorers disappearing in the process. The explorers who have returned with intact memories report seeing grand temples, ruined fortresses, and empty cities. Yekre was founded by an explorer who returned from deep within Sholn. There are many theories on what causes the shifting caves; The most popular theories are that the caves are part of gigantic living being. Other theories range from the act of divinity to primal forces of the earth to fiendish meddling with the mortal plane.

Aliksyun is comprised of several thin but tall limestone caves, connected by thin fracture-like tunnels. Like Akvianos, many of the caves are flooded, though to a much lesser extent. Cities in the province are often built along the walls of larger caverns. Tythene, the capital of the province, is famed as a city of heroes, where hundreds travel each year to compete in the Aliksyun gauntlet in hopes of fame and glory. The region is probably most famous for it’s threats; dragons, giants, golems, and nagas are among the most famous beasts of Aliksyun.

What most tales don’t speak of is that most heroes don’t return the same as they left. Adventurers return with greater might and power: impenetrable flesh, the ability to sense creatures nearby, and uncharacteristic strength. This is almost always accompanied by a colder personality and eventual madness. Few have survived this change, the ones that do transform into horrible monsters. The Aliksyun government has enacted many procedures that returning adventurers must follow, but they do little to help those succumbing to the corruption.

Kanpet is the heart of power in Rydovan. It is home to Arkepnar, the capital city of the empire and the largest city. The region is responsible for most of the industry in the empire, with Arkepnar housing more factories and workshops than any other city, Anash at a close second.

Most of the living settlements in Karakurt are in the Borderwoods, a freezing pine forest stretching 50 miles along the border between Aliksyun, Arrajant and the Lifeless Tundra that most of the region is composed of. In the Lifeless Tundra, there is almost no light, warmth, or life. Explorers in the Cartography Guild discovered that while the tundra has almost no living inhabitants, there are vast cities of undead hidden in the darkness. The empire has maintained an unsteady peace with the undead, and there have been some trade negotiations, but nobody has heard from the cities in several years, and nobody who has tried to visit the cities have returned.

Arrajant is where humans first entered the underground and is where the empire was founded. It is the home to many ruined castles and battlefields from the early days of the empire. In the recent years, Xulgath have invaded the region, seeking to replicate the success of Rydovan. After the collapse of Rydovan, the survivors of the region have banded together to fight off the Xulgath invaders that are so intent on their destruction. It is a region locked in a battle that the survivors have almost no hope of winning, only fighting so others can survive another day.

The largest single cave in the underground is a giant desert underneath an eternally glowing crystal lodged in the roof of the cavern. The region is home to Avatus City, the center of Orthodox Avatism. Outside of the city, the desert is a wasteland of small settlements and raiders. Trade caravans fuel the settlements of the region but are constantly in danger of attack from raiders. Deeper in the caves of Annak’at are strange ruins dedicated to alien deities.