Mayor Asa Soaplunge has got to go! She feeds strangers to the Man-Eater Lizards and tried that stunt with the party. With the town’s sheriff already defeated, the party gathered the brave people of Girlclocks and tried to incite them against the Mayor. Patriots but also Opportunists heeded the call when Renal promised a Tax return. 14 peasants armed with chairlegs accompanied the party to the Meadhall.

It was dark and Magdu dead infiltrated the fortress sneakily. There were few guards and he brought all the lightly armoured party members and the peasants across the wall. When Alissa tried to mount the wall, her metal armour made too much noise and the men-at-arms noticed! They raised the alarm and Asa Soaplunge was prepared for them. The few men-at-arms were quickly overwhelmed but the Mayor and her 2 allies proved to be much more slippery foes.

Gus Rais tried to recruit their Magic-User mid-combat. It was Gus who should become the apprentice of the Mage, not the other way around! The mage hasted the enemies and fired all over the place with his Magic-Missiles, he even used the dreaded Sleep spell! Eventually he turned invisible and fled after he took one rock to the face too many. The Cleric first tried to paralyze and then blessed the already hard-hitting Mayor, but he was knocked out. The Mayor herself was a tough nut to crack. She pummeled Alissa good and drove her back. Kamca faced her and the slingrocks mercilessly plinked away at the heavily armored fighter. Renal blinded her, but this only enraged her. She swung around her two-handed sword, but couldn’t do much by herself anymore. In the end she was knocked out and captured.

The Opportunists who didn’t really do much during the fight were acting uppidy and wanted to get paid right away. Gus Rais calmed them and promised pay in the future. The townspeople armed themselves in the Meadhall’s armory and the treasury was “liberated”. In the dungeons, Gilli, the deceased Elrath Priest’s daughter was freed. Was she the next to be fed to the Lizards? Alissa interrogated the enemy cleric Rere Shorebrother. He claimed to be a mere mercenary for Asa Soaplunge and that he had nothing to do with the killings in town. The captured Men-at-arms provided testimony too. What would detective Alissa do with the information? The party decided to postpone the interrogation of Mayor Soaplunge to a later date. 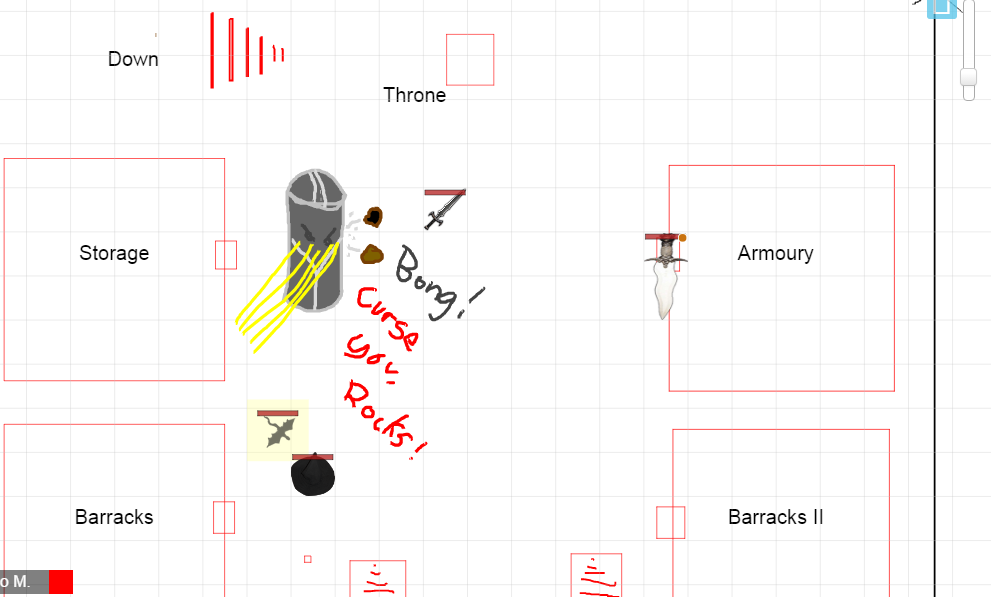 Back in town, Ylath priest Chespi approached the party. He didn’t share the sheriff’s sentiment that the lizards were preparing for a raid on girlclocks. He argued for an immediate strike against the lizard lair but didn’t want to participate himself. The cocky Mayor provided the party with the location of the lair, hoping the lizardmen would make short work of the adventurers. Magdu dead and Kamca, remembering his scouting training, scouted out the lizard lair and found that it must be inhabited only by a meager number of lizardmen.

Meanwhile (after Renal donated all his money to Ylath and would have been ready to change his faith, again), Alissa, Renal and Chespi the priest of Ylath were on their way to the Ylath Monastery while Thora and Gus Rais were catching some Z’s in town. On the way Chespi spotted ten Flunkies, monk-rejects who turned to brigandry. Alissa boldly confronted the scum after Renal’s diplomacy had failed and struck one down in a single blow. Renal doubled down and felled another flunky and even Chespi stormed out and got one. The remaining Flunkies had enough and fled to whence they came. In the end, Renal’s curse was cured and Inan Tombspirit was banished to the afterlife. They also visited the monastery and in exchange for a favour owed in the future to them, the monks sent out fifty warriors to defend Girlclocks

Kamca and Magdu brought back a crude map of the Lizard Lair and the party planned their approach. They dug pit traps to lead a superior lizard force to its doom if need be. Then they strode into view of the lone guard who they let raise the alarm on purpose. Only 3 other Lizardmen came to meet them and after half their number was slain, the two remaining retreated into the cave system. Unwilling to follow the monsters into a presumed trap, the party left for girlclocks without further investigating the ravine.

On the way back a bandit gang, twenty members strong, belonging to the hated Birds of Freedom tried to ambush the party. Your money or your life. The party chose to resist and a fight ensued. Many of the bandits fell but they continued their assault. Victory is in there somewhere! After almost half of them lay dead or dying on the forest floor they finally ran away.

In town Chespi was worried that the party didn’t kill all of the Lizardmen. He suspected that these Lizardmen would call reinforcements from [[Scaletyrants?]], the Lizardmen stronghold to the west. He pleaded with the party to call in Count Limun Pureheart’s cavalry even if that meant the end for Girlclock’s independance.

So the party traveled back to Passionhelm. On the way some Jaguars showed up but they weren’t confident enough to attack.

Renal learned that the faithful donkey Mathilda had been poisoned by the Birds of Freedom during his absence. Enraged he tried to scapegoat the Stablemaster and he nearly had his way and took his second born son away to the Elrath Convent had Alissa not intervened. The two had a huge fight just at the entrance of the convent. Sir Famoushugs took the matter before the Lord and a court was held. Renal demanded compensation for his loss which the stablemaster could not provide and wanted to publicly punish him. Alissa on the other hand even offered a replacement donkey out of her own pocket to Renal but didn’t want to see the stablemaster harshly punished.

Count Pureheart admitted that he was partly to blame, since it was his city guard that failed to spot the intruding bandits. The other half of the blame lied with the stablemaster whose lack of vigilance enabled the bandits to do their nefarious work. He offered Renal 20 gold pieces as compensation and sentenced the stablemaster to 2 hours in pillory on the market square. Gus Rais posed as a concerned farmer and swayed Count Pureheart to reinstate the bounty on Bandit hoods.