The Gap was a sudden loss of history that shook the entire galaxy. It was an event where history disappeared from the minds of everyone throughout the multiverse, and only the gods have an inkling of what happened, but they refuse to speak of it. In that nebulous time of missing history, the world of Golarion disappeared, though the gods indicate the world—wherever it is—is safe. In the aftermath of the Gap came the revelation of faster-than-light travel by means of the Drift. It was during this time that the Starfinder Society formed and became one of the eminent organizations of the Pact Worlds. The machine god Triune’s gift of rapid interstellar travel facilitated a sudden land rush by colonists and corporations alike, and as exploration became an extremely lucrative business, the information that Starfinder agents retrieved secured the Society’s prestige and wealth.

The Starfinder Society was founded shortly after the end of the Gap, and drew its inspiration from the incomplete tales of the Pathfinder Society, a similar pre-Gap organization. Its first mission was to map out the edges of the Gap in order to discover how the event happened and what occurred during its uncounted years. Secondarily, the Society focused on discovering the fate and possible location of the lost cradle of humanity in the Pact Worlds system, the planet Golarion. In the years since its founding, the Starfinder Society’s mission has shifted from investigating the Gap to exploring the galaxy now opened for exploration by the Drift beacons.

The Society decided over a century ago to prohibit exploration of a region of space known as the Scoured Stars both because of its obvious dangers and because the few missions that had scouted the systems in the region yielded little to no useful discoveries. This changed when First Seeker Jadnura spearheaded a massive expedition into the region to explore its connection to a magical artifact known as the Tear. In an event now known as the Scoured Stars Incident, The Starfinder Society lost all contact with the expedition, which was composed of nearly 80% of its assets and agents. When the remaining Starfinders in the Lorespire Complex on Absalom Station attempted to make contact, they discovered a terrifying truth: the Scoured Stars were now cut off from the rest of the multiverse by a barrier of incomprehensible power, a massive shield of aurum energy later dubbed the Godshield.

The events of the Scoured Stars left the Starfinder Society crippled, as most of the Society’s agents and assets resided within the now inaccessible systems. The Society soon received another blow when a number of veteran agents quit, discouraged by the organization’s massive losses. The Society’s prestige crumbled, and many of the Starfinders’ distant holdings fell to alien forces within months of the incident.

Only the actions of one outspoken Starfinder, Luwazi Elsebo, held the Society together. Even with the dedication of Luwazi and her allies, the Society suffered further losses as disillusioned agents opted to part ways with the organization. Maintaining the Society’s interests was too much for the few remaining agents to handle, so Luwazi turned to outside assistance from reputable mercenary organizations. With the Starfinders on the brink of ruin, Luwazi’s hopes now rest in the hands of a new generation of recruits and ambitious factions.

Today is a momentous day for the Society, as it marks the graduation of the first wave of fresh agents from accelerated Starfinder training. These agents represent the first step the Starfinder Society is taking to reposition itself at the forefront of galactic exploration.

Welcome, Agents to the Starfinder Society.

Gear set up examples by class and theme 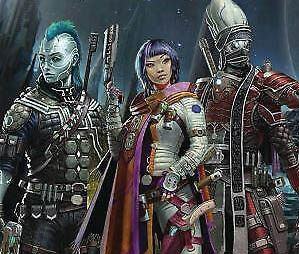 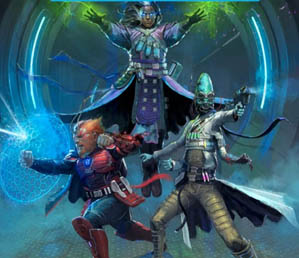