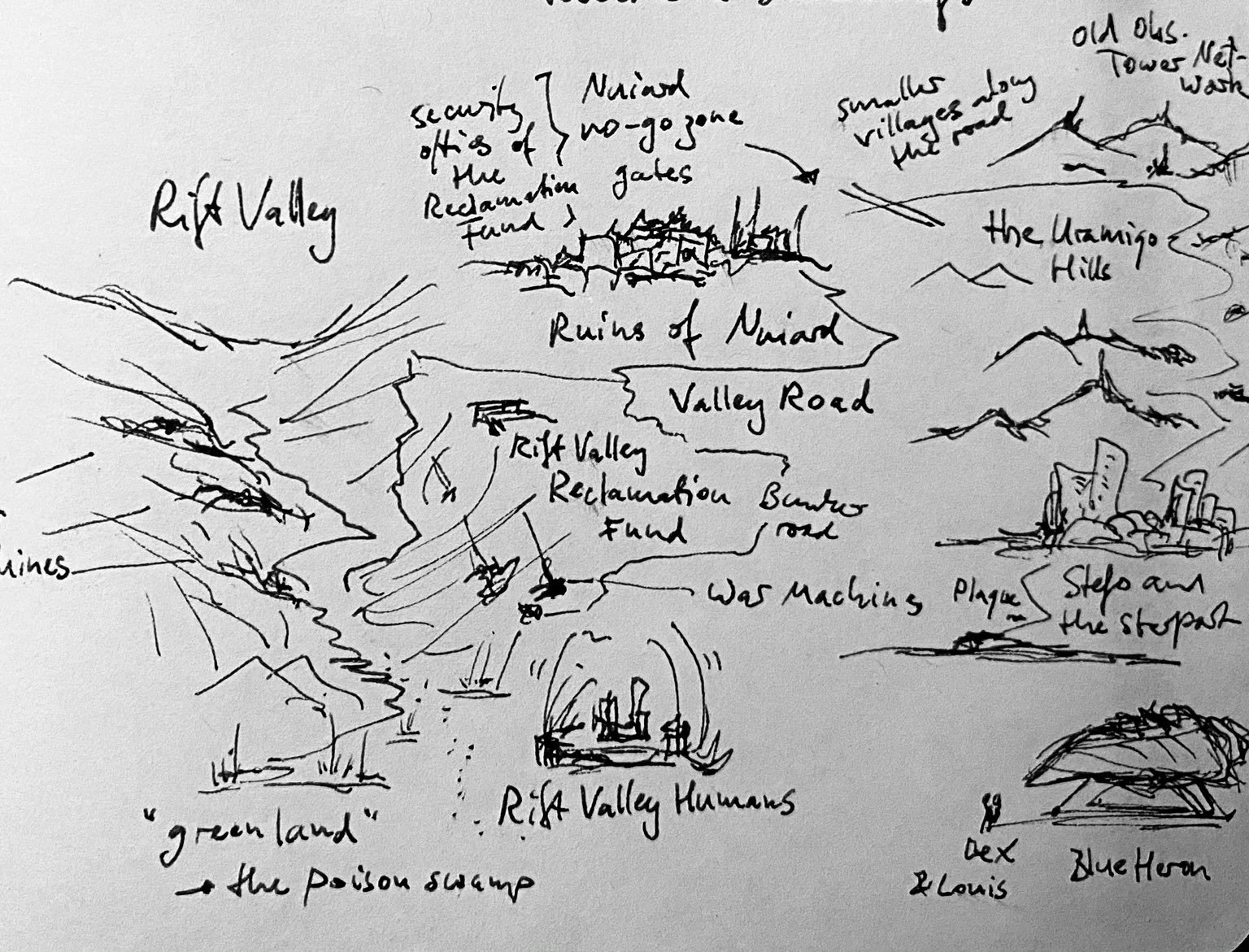 Stefo is quite a bit larger than Mars, with a diameter of about 9600km. The atmosphere is standard, close to standard Earth. The high levels of carcinogenic nano particles make filter masks mandatory.

Several billion people live on the planet (which is why the name is capitalised on the Tau subsector map). The surface is 40% water covered. Climate is “continental”, i.e. when it is hot, it is very hot, and when it is cold, it is very cold. Right now it’s winter. Stefo city is covered in dark grey snow; the Duprao Fuy is frozen and people like to skate the ice. People use snowmobiles and ATVs to get around outside the city.

Industries have caused some environmental damage but things are still under control. Hah! That’s what they say, and at the same time the filter masks are mandatory. Of course the official explanation is that it’s the amount of volcanic ash in the air that’s carcinogenic. But people are also burning an incredible amount of oil without appropriate catalysts and filters.

Settled a long time ago. Nice potential for agriculture and industry, always a bit on the volcanic side. Quick growth.

Last decade: War of Unification, won by the Union. Another severe economic down slide and mega-corp vertical silos, monopolisation.

Last two years: Union Peace. Everything is quiet. Tension lingers. As the importance of the military wanes, corporatism has taken over. The state institutions are weak.

Tech level 5 means that civilisation has a handle on radio waves, steel production, computers, combustion engines; people move around in cars, motorcycles and air planes. This is the world of the first World War and the years leading up to the second World War.

Stefo has a class E starport. A flat spot, scorched but cleaned of all vegetation. There’s rubble clearly visible. This seems quite unsafe. Rebuilding the starport has not been a top priority of the Union government. Effectively, it would need a corporate sponsor. For the moment, Standard Buildings is running the installation and it is clearly underfinanced. The empire simply never played a big role on Stefo. They were to weak to prevent the war, and too far away to help in the reconstruction effort.

At the starport gates, travellers are warned: no guns; no blades. Special licenses are required for the collection of blades. Long knives and daggers are OK. Keeping the veterans unarmed and reducing the amount of military equipment on the black markets is a top priority of the Union government. Travellers are encouraged to cooperate will all security forces (throw 8+ to avoid harassment and/or arrest by the local authorities).

The entire system has been divvied up between a handful of tech giants that provide civil full services for their customers. Entire families and buildings “belong” to their Standard Buildings, Ultimate Insurances, or General Production. Their homes, their schools, their transportation, it all belongs to one of these companies. It’s a feudal technocracy.

If the state is run by mega corps, there’s basically no difference between taxes, fees, stamps, compensations, dues, or tribute. It all goes out of your pocket towards a giant entity that may also provide services and infrastructure for you, and enrich some other people. The view on Stefo is that in this sense, “corruption” is simply the measure of the money paid by citizens that gets lost on the way to useful services and infrastructure, and the citizens of Stefo feel that there is not a lot of corruption. Their mega corp overlords are treating them well.

The question is, how do you influence the technocrats? On Stefo, the answer has long been: join the ranks, work your way to the top, and you’ll have proven that you are a worthy manager, a decision maker. During the war, this worked well enough. The constant churn of fortunes made it hard for dynasties to emerge. Now that the churn has stopped, however, whoever was on top when the war ended stays on top, making decisions that keep favouring them. At the same time, all the veterans returning from the war find that they don’t have the skills, and will never acquire the skills necessary to make it anywhere. They’re a lost generation, and that realisation is causing a lot of resentment.

This is a recent development. Until very recently, a number of wars shook the system. It was the industrial might powering the Stefo Union that finally won the war. The cities are full of war veterans that have to be reintegrated into society. Housing programs, land redistribution programs, reconstruction, there a race against time going on. Will reintegration into civil society move fast enough? Nobody knows. There are a lot of frustrated young people around that are starting to realise that they invested many years into a career with no future: the army.