They headed up the tiers of the savannah. When they reached the top there was another stone double door. Opening it there was a staircase the left leading up to another room.

They followed the stairs and they an open area leading into another room. They could hear a cacophony of moans, screeches, and squelches. Nameless flew over the room and saw a pit full of writhing limbs and howling faces. The wretched creatures were piled on top of each other and packed so tightly that the ground is not visible. From the ledge above, they pose no danger. Falling would be another matter.

Nameless flew to the other side and found a set of rusty iron gates similar to at least one other gate in this dungeon. He opened the gates and saw a low-ceilinged natural tunnel. Along the walls were eight wooden cell doors. Nameless flew as quiet as he could across the room to the other set of gates. Opening them he saw the room where they had found Garsden the gnome being attacked by chokers. He flew back across to his friends. Gilbee wanted to check things out for himself. After finding the same things, he came back and they went to the corridor to the right out of the door to the savannah room.

Following stairs down and then the corridor to the right, they found a pair of large wooden doors are painted gold and carved, depicting scenes of beasts running wild. Opening the door, they found a semicircular platform hanging over the chasm, the same chasm that they had seen in other places in the dungeon. On this platform are two golden pillars identical to the ones from the room at the beginning of the complex. In the center is a pool of strange gold liquid, emanating a warm golden glow. They all are fascinated by the strange gold liquid but Gilbee was the most interested. He took out his book and began to draw the pool from all angles. Several times he thought about what it might be like to jump into the pool. He then heard Mason’s voice and after one final sketch, they left the golden pool. They went back to the room where they had fought the ogre and the intellect devourers. They went up the stairs and then through a doorway and down more stairs to another wooden door.

Inside: The air in this room has a staticky quality to it, and a low buzz can be heard. It is a long rectangular room with a door at the far end. There is an iron chest on the floor near the exit. The room is lit by iron-sconced torches in the corners.

The group entered and were immediately under the effects of a Slow spell but they did not realize it until they had reached the other side. Mason went check out the chest but as he touched it to check for traps an arc of static electricity jumps to the nearest creature. Four bolts of lightning strike down on the corners f the room, and two Blitzorn appear. They have the appearance of tigers made of electricity, with lightning bolt patterns in their fur. Tendrils of static arc off of them as they move. They are unaffected by the Slow field, and they attack immediately.

The group defeated the blizorn and the Mason look at the chest. Inside it was a small velvet pouch containing 6 Time Crystals.

Time Crystal Wondrous item, uncommon This crystal resembles an uncut blue opal. You can use an action to crush the crystal in your hand or throw it up to 30 feet, shattering on impact. All creatures within a 40-foot cube centered on the crystal are subject to the effects of the Slow spell. The zone lasts for 1 minute.

As Mason is looking at the chest, he sees that there is a false bottom. He finds the way to open the trapdoor and he sees polish steel rungs on the wall like a ladder leading down.

They heal and then they head down the rungs.

They came to the floor. The first thing that they noticed was that this was a natural cavern and not the worked stone rooms above. The tunnel extended for roughly 100ft and had sconces with extinguished torches still lining up the corridor. Tracks of unknown origin seem to lead deep into the tunnel.

They went right. They followed the twisting tunnels until they found a storage area full of barrels, wooden boxes, and sacks all mostly full of rotted food and provisions. Basic mining and camping equipment can be scrounged after some searching as well as a locked lead coffer. The lock was intricate and still very much working. But Gilbee was able to pop the lock easily. Inside was 200 gold piece worth of gems and coins, a dull piece of crystal about the size of a thumb, and a superb golden hilt carved with flowing script no can decipher.

Mason recognized the hilt since he already had two in his possession. It was a sunblade. None of them were sure what the dull piece of crystal was but they knew it must be something of value. They stored it away to check out later.

They followed the caverns north and they found themselves in a room with 4 cells. A few stacked crates and wooden barrels remain in this room. Four cells line the back of the room, each closed with iron gates. Straw lines the floor of each cell, and while three are open and empty, the fourth gate remains locked, two small wooden crates of explosives still inside. After a brief search, Mason saw that part of the wall to the east was slightly ajar like it was a door. He asked Gilbee to take a look and Gilbee saw that it was a revolving door. He pushed it and it did not move. Mason helped him and it still did not move. Gilbee took a closer look and saw that on the other side of the door there was a pile of debris of rock, stone and other junk that was blocking the door. They decided to move on.

They went southwest and found themselves in a communal eating area. The long table and benches are made of varnished cedar and are still in excellent shape, six sets of sturdy, pewter tableware is strewn about the room. They quickly moved through the room and then to the northwest into a larger room with no exits. Towards the back of room was a broad shouldered barrel bellied grey bearded dwarf, perhaps nearing his fifth century but does not look a day over 300. He has one of the a dull pieces of crystal that they had found in the storage room. Mason and Nameless could tell that this dwarf was manipulating the magicks in and surrounding the stone. It was no longer a dull piece of crystal. It had a shine to it, a gleam similar to the ones that Mason and Nameless knew as Ioun stones. When he was finished with the stone, the dwarf looked up and sighed. He then said Oh, so he has finally sent you to kill me. 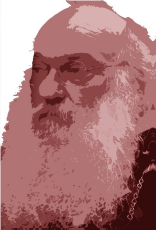 After a brief conversation in which he told them he was being forced to work on the ioun stones by Nezznar and that several Jeddan were being forced to mine the stones for him to work. Jeddan he explained were like living ioun crystals. He would take the group to meet them to let them know they he and them were being released from this mine/prison.

He the said in thanks for saving me I can make you each an ioun stone. Once I am home I will send you each 1000gp and give you instructions how to come to see me so you can see my private stash of ioun stones which can be purchased at a discount.

They back through the communal eating room and past the room with the cells. Barundar said that they could take the explosives as Nezznar’s minions would use it to harm the Jeddan. They continued east and then a little south into a room. A large crystalline structure sits in the center of the room, almost where a campfire should be, though there is little else in the room. A Jeddan lies on the floor towards the back, its crystal “head” glowing faint red, the light pulsing slowly. Wicked gashes were carved across its torso, and it doesn’t take an expert to know it is dying. 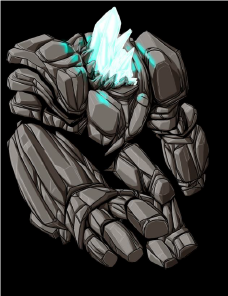 Barundar runs over and the group hears a strange humming sound coming from the room. There are two different hums and that is when they realize that Barundar is speaking to the Jeddan.

Barundar says “The Jeddan were attacked by jade spiders, one of the few creatures that can damage Jeddan. Nezznar sends them when he thinks that they are not working hard enough. This one remained here while the other four chased the jade spider away so that this Jeddan would not be injured further. The Jeddan points to the northeast. Barundar says the Jeddan is asking the group to go help his fellow Jeddan with the jade spiders. The group agrees and they head out.

They hear the fighting and find 4 jade spiders each attacking one Jeddan. The Jeddan are not looking good at all. The group comes into the room and attacks the jade spiders. The spiders did not hit that hard but they certainly were able to take a long of damage. Finally, the jade spiders were defeated.

Barundar thanked them all and gave them a stone that he would use to contact them once he and the Jeddan were safe at his house/tower. They all left the quarry and then went through the odd dungeon above and the up and out. As they were reaching the exit, Barundar said that the Jeddan had one more favor. If the group could, would they destroy the mines so Nezznar and no one else could use the ioun stones. They agreed. Once everyone was far enough away, Mason and Nameless each cast Earthquake on the mountain range. They left a sort of flat area where the dormant volcano had one been. When nothing erupted Nameless gave a sigh of relief.

The group would head back to Flynrich’s with the newest arcane residual with hopes that this time they would find Nezznar and his headquarters and defeat him once and for all.