The area around Sylaire is brown, open moor studded with druidic stone pillars. The group kept getting lost but soon found themselves in a ancient ruins of a castle or small city. All of the stonework looked very old and worn by the weather and time. Except a stone arch. They looked at it to see if it was like the arch that brought them to Anadia from Gamgee Manor. It did not. They finally stepped through the arch and found themselves in a different place. The trees were more robust, greener and more alive. It felt as if winter was so far away. In this enchanted land only one high, round tower stands where once the mighty castle of Sylaire may have once stood.

There was a trail leading up to the tower. It was more than a deer path but less than a trail. They could tell it was in use. As they approached the tower, its front door opened. Standing in the doorway was a very beautiful woman, with thick, curly chestnut hair bound with silver filigree. Standing behind her were two strong looking men.

She called out to them “I am Sephora. I know what you seek and am willing to give it to you. But. I will need you do something for me. Sylaire, my kingdom, is being terrorized by a werewolf. Not just any werewolf though. When it is in its human form, he is very powerful magic-user. He was a kindred spirit before he was transformed. Now, he and his pack stalk all of Sylaire. Dispose of this beast and the Sword will be yours.

They were not sure where to begin. Most of Sylaire was woods. They noticed that Kregerath had already taken off in search of the werewolf. In fact, Sephora had not even finished telling them about the werewolf before Kregerath had sneaked off.

Did not take long for them to find Kregerath. Well, to hear in the general direction that he was probably in. They heard a loud boom, like thunder towards the southwest of the tower. Then another one. It didn’t take much for them to realize he was setting off traps. If they could hear the boomings, others could as well, including what they were trying to hunt down. They set off in that direction to get the group back to together.

Meanwhile, Kregerath had gone up into the trees. He had searched and searched for the traps that were setting off the thunderwave spells. It was Stumbleduck that found the first glyph. He pointed it out to Nameless who used his Detect Magic at will ability to look for others. The woods were full of glyphs but they could navigate now. They had just reunited with Kregerath when a group of dire wolves appeared out of the darkness and began to attack the group. Grundy sliced through them like butter so when the spells started hitting them from above the tree canopy, they were taken off-guard but were no surprised. Nameless went for the creature using spells to try to at least slow its spellcasting down. The werewolf cast Prismatic Spray effecting everyone but Grundy who had moved on ahead to look for more wolves. It flew around casting ray of frost on folks to slow them down chasing him. Nameless cast Lightning Bolt but the werewolf seemed to absorb the energy. Later, once they had negated the werewolf’s flying ability, Grundy was hit by a strong bolt of lightning when his first attack hit the werewolf. Mason knew that the it had cast Absorb Elements. The werewolf was a pain but soon it fell and transformed back into a human. They found in him, a mirror, a purse with 500 silver pieces and a spellbook. They chopped off his head to make sure he would not come back to life and to show evidence to Sephora.

They went back to the Tower and she thanked them. She said that the Sword was in a safe dimension and that it would take her an hour to complete the ritual to retrieve it. They agreed to wait. She had her strong men bring food and drinks for the them while they waited. She appeared about an hour later and gave them the Sword of Sylaire. They now had all of the items they needed.

They left Sylaire but did not leave the swampy area in Anadia. They wanted to be away from anyone when they put the items together. They did not know if they would go to Flynrich’s tomb or it would come to them.

When the Enchanted Sword of Sylaire was anointed with the Potion of Time Travel, the blade glowed bright gold. As soon as the blade came into contact with the mirror, the party heard a high pitched humming. The mirror, ring and sword then shattered into thousands of shards.

The amber haze once more surrounded them and everyone was healed and their abilities were restored as if they had taken a long rest. The world of Anadia faded out and the party found itself on a seemingly endless plain. In front of them was a massive, square, 50’ tall tomb made of amber colored marble. Carved over the entrance was the name “Flynrich Gamgee.” 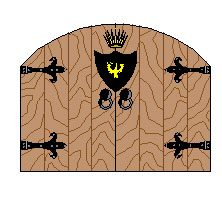 About 20 feet in from of the entrance to the tomb the ghost of Flynrich appeared. As the ghost fades in and out, it was obvious that it was taking a great deal of effort for it to materialize and that it would not be able to do so for long. It addressed the group, with relief,

“You’ve made it here… I helped you as much as I could… dangers inside… Nezznar… this time… free me… unmake… my death…destroy it.”

They group moved forward to the double doors. They were not locked. Kregerath opened the doors:

The room was a cube, 50 feet on each side. They was a door on the west wall and a door on the east wall. Standing sort of in the middle of the room but closer to the western door was a great serpentine monster with twelve legs. It was a blue and there seemed to be electricity in the air of the room. It looked at them and roared. They could see sparks of electricity surrounding the creatures eyes.

It was a behir. And it looked ancient. 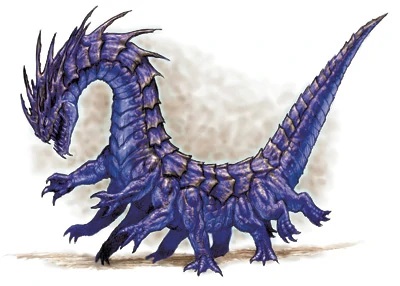 A large blue gem was on the floor beside the behir.