The drums continue but nothing came up either set of stairs. They did a quick search of the area.

As you examine the area it becomes apparent that the whole place is a virtually open room of huge size. Thick stone pillars support the stone ceiling about30’ above. Protruding columns along the walls also indicate that the tremendous weight of the great stone roof is supported by these buttresses. All of the stone is well-shaped but dull. It bears no sculpture, no ornamentation, not even any form of paint to brighten and enliven the vista. The floors are of like material, lusterless. and well-worn.

There were a number of crates and barrels and over in the northwest corner of the room was a mound of junk that looked vaguely like a nest.

Examination reveals that the contents of these containers are main l y foodstuffs of dubious quality for human consumption , cheap and shoddy cloth , water, and not much else.

The northwest corner covered with heaps of old cloth and leaves and grass. Only , from the size of these heaps, it is evident that gnolls bedded down here. A search of the largest heap reveals a rather nice feather pillow with a somewhat soiled silk covering, a large sack containing 247 gold pieces, and a small dagger with a silver handle and a topaz set in the pommel.

As one comes down the stairs, the floor of this area is immediately noticeable. Instead of the dull black of the level above, it is of polished obsidian. So too the wall to the north, but this has something else. If gazed at intently, it seems as if a faint pattern of figures outlined In deep purple can be discerned . but to look so causes the eyes to ache. A mere glance reveals no such tracery. and no amount of staring can last long enough to actually discover what, if anything, ls weirdly limned on the wall.

Gilbee went down the stairs that led east with Grundy and Mason following. As he curved around down the stairs he saw several norkers running about down several corridors and one large hallway. 3 hill giants came into view and started throwing rocks at him. He took out his Wand of Wonders and suddenly 600 oversized butterflies creating heavily obstructed terrain. The three of them moved back up the stairs and into the room above. Nameless crept down the stairs and cast Fireball getting half the hill giants and several hundred of the butterflies in its blast radius. He then cast fly and out on the hood of his cloak of invisibility.

Stumbleduck, Grundy and Schmoogle checked out stairs that led down and to the west. They did not get far when a larger than normal troll appeared with several norkers leading the way. More regular trolls were bringing up the rear. The trolls were slinging rocks while the norkers swung stone clubs and tried to bite. The norkers fell quick. Stumbleduck moved back out of the stairs and Mason moved in front of him and ended up taking the brunt of the attack from the huge troll. With a combination of spells, melee and ranged attacks mixed with fire and acid damage, the huge troll soon fell but the regular trolls pressed forward.

Nameless floating about the butterflies saw more norkers and hill giants trying to make their was through the barrier. Suddenly, the butterflies were gone. Nameless guessed that the spell had been dispelled by a caster but he did not anything like a caster in the area. Some of the norkers and hill giants ran down the large hallway and soon reenforcements were arriving.

The trolls on the left were dispatched and they came to the right after Nameless had told them of the gathering forces. He saw a mix of norkers, gnolls, couple of dire wolves, more hill giants and a frost giant approaching. Mason ran around the corner and cast Fire Storm on the Frost Giant getting two of the hill giants in its area of effect. The frost giant, one of the hill giants and one of the dire wolves ran down the hallway and into a large opening and were not seen again. The group focused on the right stairs area and it was not long before the norkers, gnolls and hill giants were taken down.

From the left side they heard more enemies coming. They were a bunch of norkers and more hill giants. These too were taken down quickly.

And it was quiet and they had a chance to look around. They were in a large chamber were the last of the hill giants had fallen:

This chamber is approximately 40’ square, with walls, ceiling, and floor of polished obsidian - or obsidian-like stone, for the material is not normal. The stone contains thin lines of purple - plum, lilac, violet - every imaginable shade of purple. These veins resemble worms or tendrils, and when seen out of the corner of the eye there seems to be a writhing movement going on. When the eye is directed squarely at the surface, it appears quite normal, but a bit disturbing. There is a lone door to the east in the northern most portion of the wall. 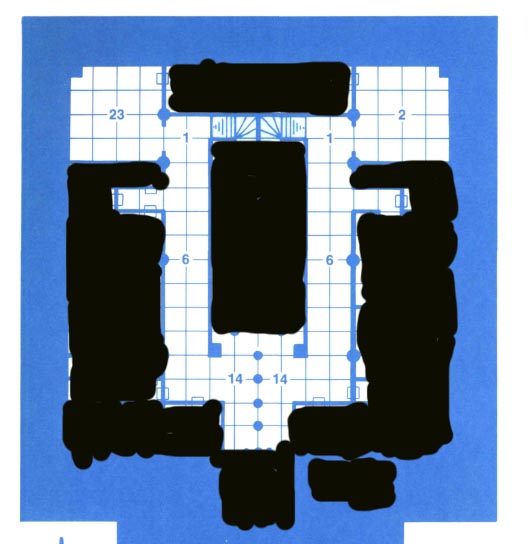