The village of /“Backwater”/ is small and poor. Some farms, a temple, a smithy. The kingdom has recently fought in a war, and some young ones went there. They came back, still without experience, because the war was not bloody, but with some equipment and a hunger for adventure.

Then the earthquake opened a sinkhole in the wood. The village elders saw among the rubble and dirt a floor of flagstones some 60 feet down, some broken columns, and a wooden door in the western wall. Informing the kingdom? Better not. Life out here was peaceful and nice, and they did not want to draw attention from the capital. While the townsfolk knit a long ropeladder, the young adventurers were called upon to take a look in and find out if there might be something interesting to be found – not for the King… for the village. 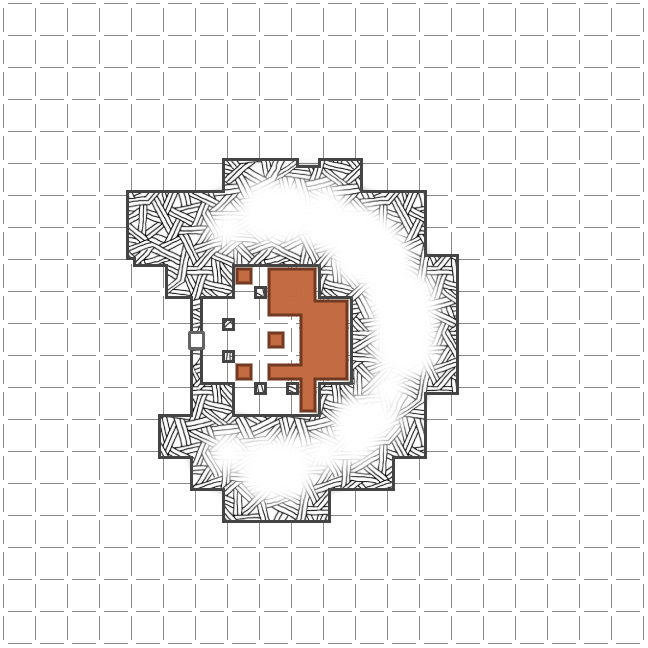 YOU are these adventurers. From the kingdom, you got a spear, a helm and a wooden shield, and you got 3d6x10 gold in pay for your services to the crown.

The first delve revealed that there is more down there than meets the eye: A labyrinth, weird cultists, lots of dead bodies, bats and spiders. What else is there to find? …

The story so far

The exploration of the underground started on a bad footing: One of their number was blinded by evil magic, and then they met hostile cultists, and found a hall full of dead bodies.
But they persisted.
Drawing on the support of villagers like Ebmulf the smith, Dago the cripple, Cassandra the old witch, and eager farmboys, they went exploring again and again. Room by room the young adventurers explored the strange underground caverns, where they found weird magic items, encountered snakes, spiders, mindless undead, and an evil cult. They managed to overcome the horrors, and in one fell swoop, took out the cultists by setting their hideout aflame. They also discovered the master of the undead, a renegade ex-cultist called Maleficus Nul, and by destroying his minions, bit by bit by bit, they finally drove him out: he took his last few skeletons and departed.
They also found a gigantic set of scales of blessing - immovable, but valuable to the village even so. And they found a room trapped with a magical undying flame, where the gifted Wally climbed along a rope to retrieve a big treasure from a locked and trapped stone chest… then they sealed the room to avoid anyone getting hurt by the flame trap.

Their success came with a harsh price: wounds, narrow brushes with death… and then their strongest fighter was slain by a horrible ghastly creature from a crypt. Their priestly acolyte, whom everyone thought would one day take over the local temple from the blind old cleric, was struck down by zombies. And the energetic young magic user Ysa was slain by skeleton archers.

Taiwar’s cousin CHP, Ysa’s sister Yaelle and their parents, and Pat the farmboy joined the party to carry on and make the land safe for the beautiful village.

Drefdalf managed to forge a connection with a haunted furnace, and together the adventurers managed to free the spirit and let it go on to the afterlife in peace. They saved the life of an arrogant elf, and the life of a nice elf. They made friends with another adventuring party. They made friends with the local kobold population and started to sell kobold beer back at inns and taverns in the region.

For a moment, it all seemed perfect. They had cleaned out a good section of the dark halls, sealed off the exit to the west, and Drefdalf the Halfling and Suki the Dwarf married in the conquered halls, once hostile, grim, and full of the dead. Now cleaned, decorated, and filled with music and joy.

That was the moment the Hobgoblins showed up. The first contact was open and friendly. But it turned out that these Hobgoblins were part of a larger group planning to attack and subjugate other factions in this surprisingly big dungeon, and that they would get reinforcements.
The group decided to step in. They warned the targets of the intended attack and they blew up the Hobgoblin’s back exit with barrels of black powder obtained from the kobolds. At the same time, the lizardmen blew up the corridors leading to their section of the dungeon, leading to a disastrous failure of the hobgoblin attack.

During this mission, the group discovered two trading wizards from the capital and their entourage of eight fighting-men on minimum wage, who were captured and bound by the hobgoblins. Before blowing up the entrance, the party freed these men and brought them to the village, where the wizards explained that they were here to find and loot a fabled laboratory to sell its contents. But they abandoned this plan, given the sheer number of opposing forces who live here. However, one of them shared access to his spellbook with the party wizards. So the book-folk was out for two full weeks, copying and analyzing spells.

In the meantime, the others teamed up with the other adventuring party and together went to scout out possible escape routes of the hobgoblins. They found the “Descendents of the Builders”, a horde of primitive, half-crazed humans living under the rule of “the Pince”, whom the party befriended after freeing the rogue Jaques Nightingale, who was set to be eaten by the Descendents. The village and the Descendants went on to form an alliance of sorts, and the blocked stairway to level 2 was reopened. With new allies found, the group went to kill a giant mouse for the kobolds; while setting up a trap, they met an orc group and befriended them. These orcs - who also mentioned the laboratory deeper in the dungeon - hunted and killed the giant mouse for the group.

Turned out the mouse had offspring, so one more big mouse to kill. But before that, the party rented goblin slave Snotty as translator to work with the Descendents. Together with them they explored the hobgoblin area and in two final battles destroyed the hobgoblins. Two survivors fled into the darkness, one L4 hobgoblin was captured. In the battles, NPC cleric Alira and PC fighter CHP were killed. The Descendent “Erok the Mighty”, even though unable to understand common, joined the party.

The kobolds have also hired the party to attack and kill “da dragon”, a monster that kills kobolds in the dark. Piecing together the available clues, the party expects to face not a dragon, but a demon, and wants to prepare accordingly.