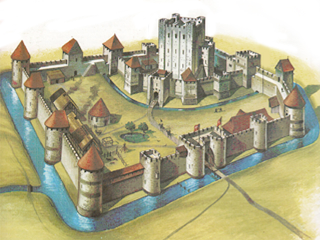 Military fort constructed by Baron Morgan Rathwynn 40 years ago after a successful campaign against the humanoids in the area, now under control of his son Baronet Halden.

Known as a military garrison and outpost to the southern frontier, home to adventurers.

Approximately 3 days journey from Slateholm in north. Situated on the banks of the Zephyr River. Well defended.

And other locations not yet visited…